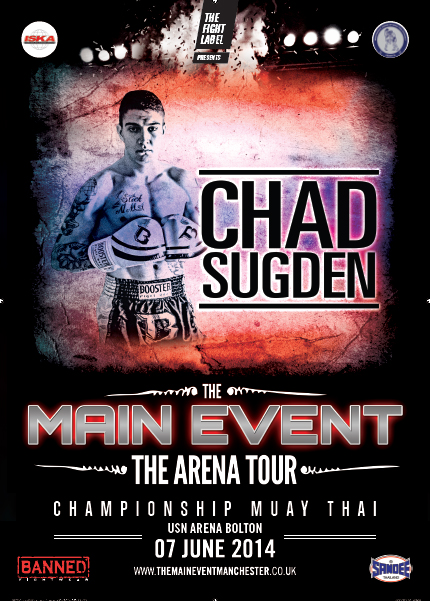 Two of the brightest stars on the UK kickboxing stage will go head to head when Chad ‘2 Slick’ Sugden meets Nathan Epps in front of a 5,000-strong crowd in the USN Bolton Arena on 7 June, it was announced today.

Confirmation of the match-up on The Main Event’s Arena Tour came within hours of 2 Slick’s Super Fight on the card of the K-1 Max World Max Quarter Final in Gran Canaria on Saturday 11 January.

The only UK fighter signed to a long-term contract with K-1 Global, Chad defeated Spain’s Jorge Falcon in spectacular fashion with a first round knock out.

In October 2012 Chad and Nathan both competed in the 8-Man Grand Prix Tournament in Warrington, with Nathan defeating Brad Stanton and Kerrith Bhella in his first two matches while Chad secured his place in the final with victories over Solomon Wickstead and Peter Tiarks.

Injured in the semi-final, Nathan was forced to withdraw in favour of Bhella, whom Chad went on to beat convincingly on points for the title and the purse.

Now the two will finally get to battle it out in Bolton, over three 3-minute rounds at 71kg under K1 rules.

“Although still only 19 years old, Chad is already well on the way to the very top of his chosen career,” commented Dean Sugden, head coach of Suggy’s Gym.

“His record as an amateur is unrivalled, with 100 wins and only five losses; along the way he defeated some of the very best, including David Lenson from Brooklyn, Portugal’s Oscar Nave, Ireland’s Charlie Ward and Scot Allen from Scotland, capturing multiple world titles under Full Contact Kickboxing rules.

“Since turning professional in March 2012, Chad has fought on Enfusion and Glory as well as on K-1 Max events in Spain, winning 11 out of 12 pro fights. Among the big-name opponents he’s taken on and beaten are Joe Roberts and Sam Wilson from the UK, Romania’s Costel Paniscius, Italy’s Paolo Fiorio, Ahmed Astitou of The Netherlands and of course most recently Spain’s Jorge Falcon.

“The current ISKA Pro World Champion, he’s now determined to cement his position as the UK’s leading K1 fighter and ultimately to secure his legacy by dominating the world-wide K1 scene.”

Trained by Steve Logan of K-Star Gym in Birmingham, Nathan has notched up 32 victories out of 40 fights under Muay Thai rules and has recently recorded knockout wins over current WBC National Champion Mike Egan and Ireland’s Jonno Bracken.

“This fight has been over a year in the making and both men are eager to prove their talent,” said Phil Shedden, joint promoter of The Main Event.

“With scouts from across Europe in attendance, a win here for either of them could set up further potential fights on some of the top kickboxing promotions in the world.”

Ticket details and further information on the line-up for The Main Event can be found at the maineventmanchester.com