More than 250 local fans travelled to Birmingham on Saturday 23 May to support Nottingham’s Chad ‘2 Slick’ Sugden in his quest to become the first fighter to defeat Michael ‘The Punisher’ Wakeling in the last decade.

Brought to the Barclaycard Arena by the UK’s longest-standing and premier promotion, The Main Event attracted over 4.000 Muay Thai and kickboxing fans who were rewarded with a production featuring staging and lighting of a standard normally associated with top level boxing shows.

Headlining the event and with the vacant 75kg IKF World Title at stake, the Sugden/Wakeling match up had been the subject of widespread speculation and excitement across the fight world since it was first announced several months ago.

With both contestants coming from famous fighting families and each bringing an impressive pro record to the ring – Chad fighting all over the world, on the K-1 Global promotion and more recently the Glory World Series, and Michael twice world champion and current Enfusion world champion – the stage was set for an thrilling confrontation.

After a cautious start, Chad dominated the first round with his slick boxing skills. In a move disallowed under K1 rules, Michael attempted to catch Chad’s foot without immediately striking but, with Chad avoiding almost all of the heavy punches and kicks coming his way, the end of the round left the Suggy’s Gym camp feeling confident.

The second and third rounds followed a similar pattern, with Chad landing some great counters as Michael attempted to come forward but with ineffective technique. An impressive spinning back fist from Chad rocked his opponent and had his corner shouting for him to follow it up.

Urged to push and press more and capitalise on his slick and superior boxing skills, Chad felt he had Michael’s number after the first three rounds. Fighting to their individual strengths, both Chad and Michael impressed the judges with their different styles and a close fourth round could have gone either way.

In the fifth and final round, Michael responded to his own corner’s encouragement to keep putting on the pressure. Having used his superior movement to great effect in the earlier rounds, Chad was now starting to tire and was caught with some good shots as he opted to stand and trade. Although none of the punches or knees hurt Chad, it obviously influenced the judges. It also made it exciting for the fans, as his camp urged Chad to do what he does best and ‘Make ‘Em Miss, Make ‘Em Pay’.

At the end of the round, both camps celebrated what they thought was a win. The decision was announced as a split, with one judge having Chad winning by two points and the other two having Michael winning by one.

After the fight, Chad was quick to praise his army of supporters. “Family, friends and fans always turn out in force when I fight on home soil. This time they exceeded all of our expectations and I can’t thank them enough for making the trip to Birmingham and making plenty of noise supporting me!

“It was a hard fight and a close one but make no mistake, I will be back – and I’ll be back better than ever.”

Head coach Dean Sugden added: “There’s no doubt Chad can perform better than he did tonight but, that said, it was a great fight and difficult to call. When the final bell went, we thought it was ours; they obviously thought it was theirs. We think the judges were influenced by their Thai-style celebrations of rounds which Michael clearly lost but when it comes down to it, sometimes close fights go your way, sometimes they don’t.

“Chad’s rise to fame has been amazing. Most fighters don’t reach this level in the career – for someone just 21 years-old, it’s unrivalled in the history of K-1 style kickboxing. But his journey has barely begun and we’re confident that with his own skills, dedication and determination, as well as the support of his training camp, sponsors and fans, it’s a journey that will take him to the very top.” 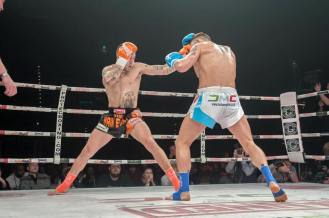 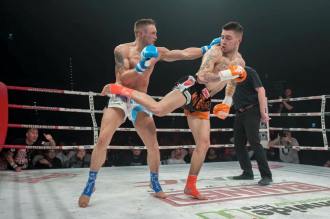