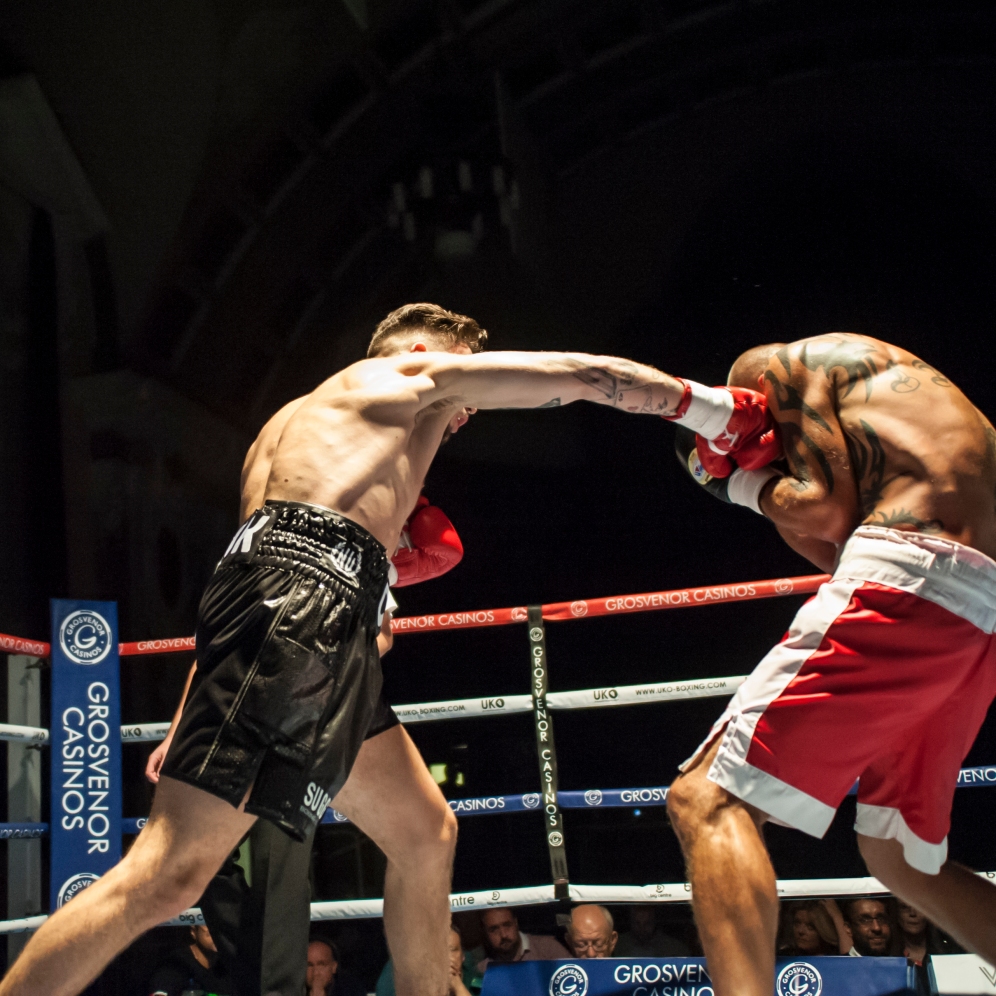 2 Slick in action in September – Photo by Mark Jones 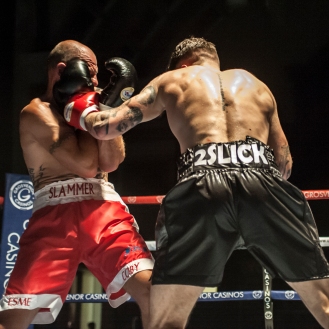 2 Slick in action in September – photo by Mark Jones 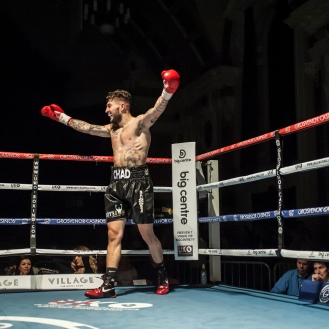 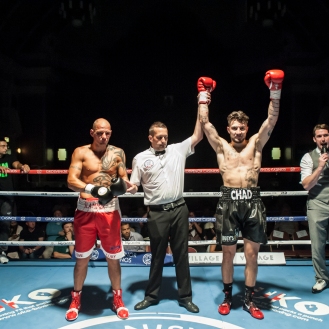 Chad ‘2 Slick’ Sugden sent a clear message to the professional boxing world on Saturday 24 September, when he stole the show on the card of High Stakes with a stunning demolition job on a strong and normally very durable Kieron ‘Slammer’ Gray.

“I’m here, I earned it, at Walsall Town Hall tonight I owned it – and the best is yet to come!” said the Suggy’s Gym 22 year-old after his victory by KO in round three.

With an unbeaten record since he made the switch from kickboxing to boxing in May, the 22 year-old from Nottingham was already establishing a reputation as the one to watch on the British boxing circuit. But while many of the boxing fraternity were expecting Chad’s skills to be superior to those of his more experienced opponent, no one outside the Suggy’s Gym camp had anticipated that the bout would end in a third round knockout.

Setting the pace from the outset, Chad made his opponent miss and pay throughout the first two rounds and, although Kieron tried to keep up, his counter-punches constantly fell short.

After some punishing head and body shots in the second, the Suggy’s Gym corner was advised by the ref that a punch from Chad had caused a cut to his opponent. Instructed by head coach Dean Sugden to step up the pressure and look for the stoppage, Chad went into the third to do just that, switching from head to body, bringing punches up through the middle and around the side to create some great angles and showing outstanding power and movement.

Kieron came back at Chad but the Nottingham fighter stood toe to toe with him and, cheered on by the large group of fans who had made the journey to Walsall to support their local favourite, dropped his opponent with a nasty left hook to the body. With Kieron hurt and failing to beat the count, the victory was Chad’s by KO and his unbeaten pro record was intact at four wins from four fights.

“I felt strong and confident from the start, even warming up on the pads before the fight, and loved every minute of it,” said 2 Slick. “As always, my sponsors, family, friends and fans have been incredible – they’re sharing this journey with me and they play a huge part in helping me to realise my dream.

“A big thank you to them all, from my sponsors BillyOh, Anderson Green, Extrudakerb, Evolution Waste Management, GoodFit Nutrition, Pain Fightwear, London Eye Bespoke Eyewear and The Atrium to my coach, manager and dad, my mum and my girlfriend Georgina, all of whom are behind me 100 per cent every step of the way.”

Although the training camp for this one was shorter than usual, Suggy’s Gym head coach Dean Sugden predicted Chad would prove too strong for Kieron. “This will raise a few eyebrows, I know – Kieron’s gone the distance with some big names and big hitters in the boxing world, including Tommy Langford who was due to fight Chris Eubank Junior later this month,” said Dean.

“After his win on Saturday, Chad’s now moved up to 25 in the UK rankings and we’re already looking ahead to his next outing. This one is going to be really big and we’ll be releasing the details soon but for the moment, all we can say is save the date – Saturday 19 November – this is one night everyone will want to share with us.

“In the meantime, all eyes will be on Newark next weekend, when The Road to Glory 3 comes to the Magnus Sports Centre on Saturday 1 October. Chad will be there of course, supporting the boxers and kickboxers from NMA and his brother and fellow Suggy’s Gym professional Bailey ‘BadBoy’ Sugden.

“We’ve a great night in store and Bailey’s fight alone will be well worth the ticket price!”