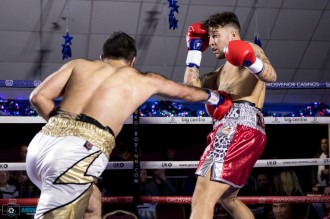 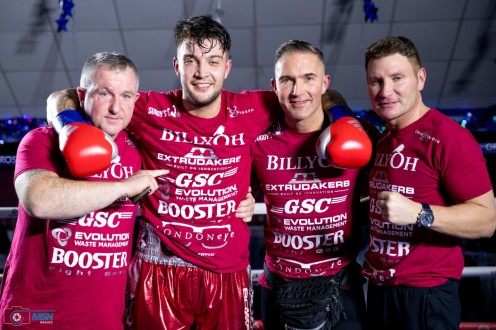 Newark’s Chad ‘2 Slick’ Sugden stole the show on Saturday 22 December, adding another victory to his record with an emphatic fourth round TKO win in front of a packed crowd at Walsall’s Bescot Stadium.

Appearing on the card of Jingle Brawls, the Suggy’s Gym 24-year old was up against a dangerous and unpredictable opponent in Taha Mirhosseni,  who had previously knocked out unbeaten Cruiserweight Matthew Sennett. But the Nottingham-born Light Heavyweight was in spectacular form, never putting a foot wrong in a strong and dominant performance.

Finding his range early on in what was scheduled to be a six-round contest, Chad soon began to pile on the pressure, dropping Taha twice in the second round with devastating right hands. His opponent never stopped swinging but this worked against him as ‘2 Slick’ made him pay as he landed some powerful and accurate punches.

After Taha was saved by the bell at the end of the second round, the third saw a calm and patient Chad back at work picking his shots in a punch perfect performance.

With another fight on the cards in the next few weeks, Taha clearly wanted to make it to the bell at the end of the scheduled six rounds. But he was thwarted by what was to come as Chad went all out to give his most dominant performance in the fourth, knocking him down twice before the referee finally stopped the contest on the third sustained attack to save Taha from further punishment.

“As always, we had the biggest and best support in the crowd, with over 100 people making the trip with us to Walsall,” said Chad. “I promised them an early Christmas celebration and I think I lived up to that. Now I’m looking forward to the next challenge, which comes on Saturday 16 March when I’ll be boxing on home ground at the Nottingham Harvey Hadden Sports Village.

“We’ve thrown down the gauntlet, offering Light Heavyweights out there the opportunity to take me on for the vacant Midlands title. I don’t care who my opponent is, I’m ready for anyone who’s prepared to step up for this one – and then I’m going to do it the old school way, working up from the Midlands title to the English, British and European all the way to the World.”

Among those congratulating Chad on his win was John Costello, trainer of WBA World Super Middleweight challenger Jamie Cox.

“ I’ve seen Taha beaten but never have I seen him get such a sustained beating. Chad was strong and dominant throughout, his shot selection, patience and movement were spot on,” he said after the fight.

“Chad’s supporters were treated to what was probably his best performance yet as a professional boxer last Saturday,” added Suggy’s Gym head coach Dean Sugden. “We were all buzzing to see how happy he is to be back doing what he does so well and can’t wait to see him in the ring again in March for his first title shot.

“There’s no doubt in my mind that he’s ready to step up to 10 rounds for it. Now all we need is someone out there who’s ready to take up the challenge.”